Purrs! Hermione here with the next installment of my Kitty Korner Column. Today, I’m proud to announce that my grandma Debbie has published a new mystery called Sea Scope. I am so proud of her, and even though she used my brother Harry for a model with the cover of the large print edition of this book, I understand because there is a black cat in Sea Scope.

I had my time in the limelight when a calico was in the book and on the cover of her 4th Cobble Cove mystery, Love on the Rocks, but that was before I even met her.

In any case, I managed to squeeze into a photo of Debbie’s new book with my brother.

Even though I can’t read, I heard Debbie editing this story, and I think it’s going to be a best seller. I’m very excited about it because I love being the pet of an author. It makes me so happy that I can roll on my back in joy.

Here’s a pawsome excerpt from Sea Scope that features Al, the cat, who could be Harry’s twin.

Alabaster came meowing into the kitchen looking for his breakfast. Alabaster, or Al, for short, was a black cat she’d adopted to keep her company five years ago. She’d named him for the white, stone-like material as a joke and thought it funny that he often hung out by the inn’s statues that were composed of the same substance.

“Hi, Al. I was just going to check the mailbox before feeding you.”

The cat followed, tail held high as Julie walked out to the porch. The postal box stood to the side beyond the rockers and patio swing. It was a long white box that needed a touch up. She made a note to repaint it when she had time.

As Al circled her legs emitting short cries that signaled his hunger, Julie checked for mail. There was one letter inside the box. It wasn’t in an envelope and bore no stamp. Someone had dropped it off. She figured it was an advertisement, but when she unfolded the paper, she saw that it was a note written in childish handwriting. Each letter had been marked with a different crayon. As one sensitive to color, she realized that the hues composed a rainbow missive.

She took the paper and sat in one of the high back rockers she had covered with padding with her mother years ago and had replaced one lonely spring when she was between boyfriends.

Al continued to beg for his breakfast.

Julie had forgotten her reading glasses inside. She didn’t like wearing them because they aged her face. She squinted at the words, the light crayoned letters making them difficult to read.

“Do you really think you should reopen the inn? How many more deaths do you want on your head?”

She gasped. Al sensed her dismay and stopped crying, his body alert to danger; the fur on his back starting to rise.

She was tempted to tear up the paper but reconsidered. Should she go to the police? They were never helpful in the past, and this was obviously a prank. Glen was dead, buried in the family cemetery nearly two years ago. 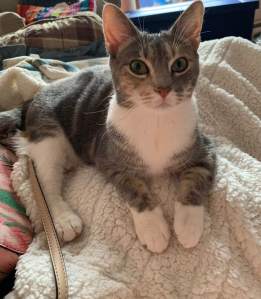 That excerpt had me wide-eyed but not bushy-tailed. I’m not a bunny.

If you like how grandma’s book sounds, here are the places you can buy it:

You can also buy Debbie’s books on Amazon.com from her author page or from clicking the big  pawprint on the top right side of this blog that says “buy books.” Remember, part of all her royalties go toward the care and feeding of me, Harry, and Stripey.

Purrs until next time, Hermione.