Meow, there. It’s Sneaky with an interview with a dog character from a cozy mystery. What is your name and your author’s name, Mr. Dog?

It’s doggone nice to meet you. What book(s) have you appeared in? Please list them and their genre.

I’ve appeared in three DIY Diva cozy mysteries: Death by Association, Death by  Design, and Death by Proxy, the latest in the series.

I like to think I’m unique, but I have to confess that I’m a combo of my author’s dogs, a yellow Lab, and a Pryador (black Lab/Great Pyrenees)

There’s no shame in that. You should be proud. I was based on my author’s Siamese cat, Oliver, who has now gone to Rainbow Bridge. I am glad I can still honor him by being in her Cobble Cove books and in her recent holiday story, Sneaky’s Christmas Mystery.

This is from Death by Proxy. The scene takes place at Tracey’s house, where she’s holding a bridal shower for my mommy, Laurel McMillan, the DIY Diva.

Just as I was about to get up, Bear began barking frantically. I could tell his little nuances, and this sounded like more than just wanting to come back inside the house. I excused myself and went to the kitchen door. He had his front paws braced on the door, but he backed down as soon as he saw me coming and raced inside when I opened the door. Oddly, he didn’t even pause in the kitchen, where extra food was laid out on the counter tops.

“Bear, come here,” I called, and he turned and ran back to me, but then took off again.

Tracey was about to open the front door when she saw Bear coming. “Just a delivery,” she said. “Probably the sandals I ordered online.” Tracey bought almost everything, except her groceries, online, so she was constantly getting packages delivered.

I went over to the door and held Bear by his collar, tipping his blue bow tie to a sporty angle, while Tracey opened the door.

At the sight of the skinny, long-haired young man, dressed in a gray short-sleeved shirt and matching pants, Bear snarled and growled, and the man hastily handed Tracey a package and beat a quick retreat while Bear barked furiously.

“That’s odd,” I said as Tracey closed the door. “Bear usually barks when I get a delivery, but he’s never acted like that before when someone came to the door.”

“Maybe he didn’t like the guy,” Tracey said. “He looked sort of sketchy to me. I’m just going to put this in the bedroom, and I’ll be right back.”

The guests had all watched Bear’s performance in surprise, but, now that he’d settled down, they complimented him on being a good watch dog. It was a wonder he hadn’t knocked someone over in his frenzied dash to the front door. I straightened his bow tie, and told him to sit as I joined Amy and Cynthia, who were talking to Jennifer now.

“How did you guess?” I chuckled. “Tracey suggested that he could be the ring bearer, but I thought that would be taking things too far.”

Pawsome. Thanks for sharing.

I get to go with my mommy on walks every day, and we have a lot of adventures.

Adventures are the best for us character pets.

Do you talk in your books or are just silent like I am, although I meow and make other cat sounds to communicate with Alicia and the other characters?

Woof! I don’t talk, but ‘m really good at barking, though.

So I hear.  What advice would you give other dog characters?

Have your pet parent make some yummy tuna rice treats for you. They’re one of my favorites. The recipe is in the back of Death by Proxy.

Yummy. I love tuna, but the only recipe in one of our books was for peanut butter sandwiches because the owner of Fido, my dog co-character, eats them for lunch every day and has a special recipe for them.

My author has a historical mystery, The Six-Week Solution, coming out in January, but I’m not in that one. It’s set in Reno, Nevada, in 1955, where a deputy sheriff’s investigation into a deadly accident leads to his discovery that some of the women staying at local divorce ranches for six weeks so that they can get a quick divorce are in grave danger.

That sounds interesting. My author has written a few non-cozy books, too. Her latest was Sea Scope, a psychological mystery about a murder at a lighthouse. There are two cats in it who play small roles.

It was nice chatting with you, Bear, and best of luck to you and your author on your new release. I’m sharing your author’s blog tour for the book below along with another great excerpt.

Death by Proxy: A DIY Diva Mystery
by Paula Darnell

About Death by Proxy 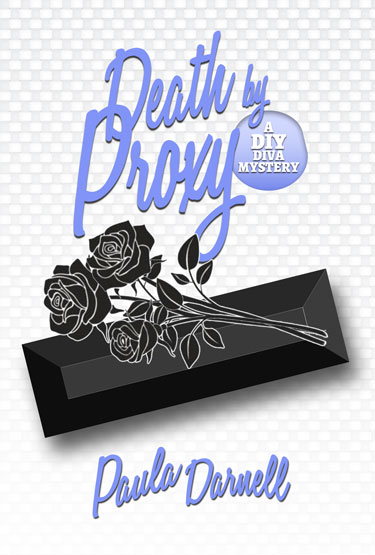 With preparations for her upcoming wedding to handsome Wes Wesson, a Center City police lieutenant, on track and her DIY Bridal Crafts class at Hawkeye Haven’s community center wrapped up, DIY Diva Laurel McMillan looks forward to a calm pre-nuptial week to finalize her wedding plans. There’s only one problem: the week turns out to be anything but calm. Laurel and Wes narrowly escape being run down in the parking lot of their favorite restaurant. Laurel’s bridal shower is interrupted by a mysterious stranger who sends Laurel’s lovable chocolate Labrador retriever Bear into a frenzy, and when Laurel and Wes go to meet Lisa, their real estate agent, at a house she promised to show them, they discover Lisa’s sister’s body floating in the pool. Strangely, Lisa seems more concerned with selling houses than she does with her sister’s death. After Lisa’s mother inadvertently reveals family secrets, Laurel wonders whether Lisa could have killed her own sister. Will the mayhem and murder stop before Laurel discovers the key to the killer’s game plan?

“Duane Harris Wesson! Is that your idea of a proposal?”

If I’d been standing, I’d have put my hands on my hips, but I was sitting beside Wes on the sofa in my den. He’d just suggested that a riverboat cruise on the Mississippi would make a great honeymoon, but he hadn’t asked me to marry him!

“Uh, definitely not.” My boyfriend grabbed a pillow, placed it on the tile floor in front of me, and knelt on the plush cushion. He took my hand. “Laurel, sweetheart, I love you, and I’d love for us to spend the rest of our lives together.”

He fumbled in his jacket pocket for a moment before pulling out a small velvet-covered box. He opened it and took out a spectacular diamond ring. “Will you marry me?”

“Yes!” I said breathlessly, and Wes slipped the stunning ring onto my finger.

Bear, my chocolate Labrador retriever, had been snoozing on his bed in front of the fireplace, but sensing that something was up and not wanting to be left out, he came over and sat in front of me, next to Wes, and put his head on my lap.

Wes put one arm around me and the other around Bear, as I leaned forward to kiss him.

“Good,” He rose and sat beside me. “That’s a relief. When you called me by all three of my names, I knew I had to up my game. When I was a kid, my mom used to say that to me when I was in trouble.”

“Well, you’re redeemed. Not many men would tolerate a dog nudging his way into a proposal. You’re a very special man, and I love you madly.”

Wes took me in his arms, and we managed a proper kiss before Bear began gently prodding us with his nose.

“Don’t worry, Bear,” Wes reassured him, as he scratched behind the inquisitive dog’s ears. “You’ll always be part of our family.”

Like Laurel, the main character in Death by Association, Paula enjoys all kinds of arts and crafts. Some of her memorable projects include making a hat and a cape to wear to Royal Ascot, sewing wedding gowns for both her daughters, exhibiting her textile and mixed-media artwork in juried art shows, and having one of her jewelry projects accepted for inclusion in Leather Jewelry, published by Lark Books. She sells some of her jewelry and hair accessories in her Etsy shop: www.etsy.com/shop/PaulaDJewelry.

Paula’s interest in DIY craft projects and fashion led to her writing hundreds of articles for print and online national publications.

Living in a guard-gated community governed by a homeowners’ association gave Paula the idea for the setting of Death by Association. She finds that residing in an HOA community can be both a blessing and a curse. A Happy-New-Year greeting from her community association called on residents to “start the new year by reviewing your Rules and Regulations booklet,” something unlikely to top anyone’s list of New Year’s resolutions.

Paula lives in Las Vegas, Nevada, with her husband Gary and their 110-pound dog Rocky, whose favorite pastime is lurking in the kitchen, hoping for a handout.

December 11 – I Read What You Write – REVIEW

December 14 – My Journey Back – AUTHOR INTERVIEW

December 15 – Cozy Up With Kathy – SPOTLIGHT

2 thoughts on “Sneaky the Library Cat Interviews Bear, the Labrador Retriever from Death By Proxy, a DIY DIVA Mystery by Paula Darnell”