Sneaky here with another pet interview. Hello, Mr. Doggy. What is your name and your author’s name?

My name is Piper and my author’s name is Kim Davis.

Nice to meet you.

Sprinkles of Suspicion is my first appearance in the world and it’s a cozy mystery. You might say that my author is a bit of a wimp… she doesn’t want to see any blood or guts anywhere and she likes happy endings. She’s a little like me, a scaredy-cat… err dog.

Sounds like my author. She writes cozies, too, but with cats in them, although Fido is my pet co-star in her Cobble Cove mysteries. He’s a Golden Retriever and not a bad guy for a dog.

Sprinkles of Suspicion is the first book in the Cupcake Catering Mystery series. My owner, Emory Martinez, has had a lifelong dream of owning a cupcake bakery but could never afford to leave her accounting job. After we left her ex-husband (I never liked him and hated when he took me away from Emory right after they got into a big fight) we moved into a pool house owned by Tillie. Tillie has gray hair and is about 12 years old, in dog years that is. She’s always sneaking treats to me and I really like her. Tillie lets Emory use her kitchen to bake cupcakes and sell them to Tillie’s friends. Somehow Emory finds dead bodies and gets into trouble and Tillie wants to help her out. I want to help her out too but she’s always trying to protect me instead of letting me do my job.

Nice plot and characters. I get some treats at the Cobble Cove library, but you’re lucky that you get cupcakes.

I’m based on and named after my author’s grand-doggy, Piper. When she started thinking about writing this story (which was several years ago) she discussed the idea with her youngest granddaughter, who insisted I be named after her dog. The granddaughter also begged to have her name, Emory, used for the protagonist as well. After securing permission from the parents, our names made it into the book and I’m quite proud to say my photo was used for the book’s cover!

Adorable! Debbie has used real character names in her books. Her first one, Cloudy Rainbow, was in memory of her cat, Floppy who was in it. Although I wasn’t named Oliver for Debbie’s Siamese, she did feature a Siamese on the cover of Written in Stone and Sneaky’s Christmas Mystery, a short story that won a Certificate of Excellence from the Cat Writers’ Association. They are both close likenesses to me, but I am more handsome, of claws.

“I know you’re excited to be home, Piper. Give me a second to get my things.” I remembered that Mother had sent me home with some leftover fruit too.

Instead of quieting down, Piper barked even louder. I unlocked the door leading into the kitchen and set my packages and purse on the counter. Piper raced to my bedroom and barked without letting up. When her bark changed to a deep growl, the hairs on the back of my neck stood up. Was someone in the house? Should I call the police?

“Piper, come, girl.” Of course she didn’t listen and barked again. Perhaps a rodent had slipped in and she had it cornered.

I tiptoed to the bedroom and came to a sudden halt. Someone had smashed the window and ransacked every drawer then strewn the contents across the carpet. My clothes had been yanked from the closet and various garments piled in heaps on the floor. My heart broke when I saw my girlhood jewelry box smashed to pieces and my treasured photos ripped in half. I knew I had digital copies on my laptop, and I could always reprint the photos, but somehow knowing my grandmother and my father had once touched these same pieces of paper used to bring me comfort.

Pawsome! You are a great actor, Piper.

She’s always baking or cooking and if I get lucky, I’m there to scarf up whatever is accidentally dropped on the kitchen floor. I’m kind of like a vacuum cleaner given a chance.

Most dogs and cats are. I love grabbing the treats that are left in the library’s break room.

Are you a talking pet in your books or just a silent one like I am who just meows occasionally?

As much as I’d like for my owner to understand me, all she hears is barking and if I keep it up, she gives me a timeout in my crate. But at least she gives me a new chew toy while I rest.

Be as cute as you can be because you can score extra treats that way. Plus, be on the lookout for danger for your human because you’ll be rewarded with more treats.

Cake Pop-ped Off, the second book in the Cupcake Catering Mystery series, will most likely be released in early October 2020. Edits are being done and the recipes are being tested. Cake Pop-ped Off is a Halloween-themed cozy mystery and Emory finds the body of the barmaid stuffed into her bathtub during her Halloween party. I’d like to say I was there to help discover the body but instead Emory’s twin nieces had me dressed up like a pig for their own Halloween carnival. I only put up with it because of all the extra treats they gave me.

Thanks for the great interview, and tail wags to you and your author. I’m sharing the blog tour for your new release and a giveaway.

About Sprinkles of Suspicion 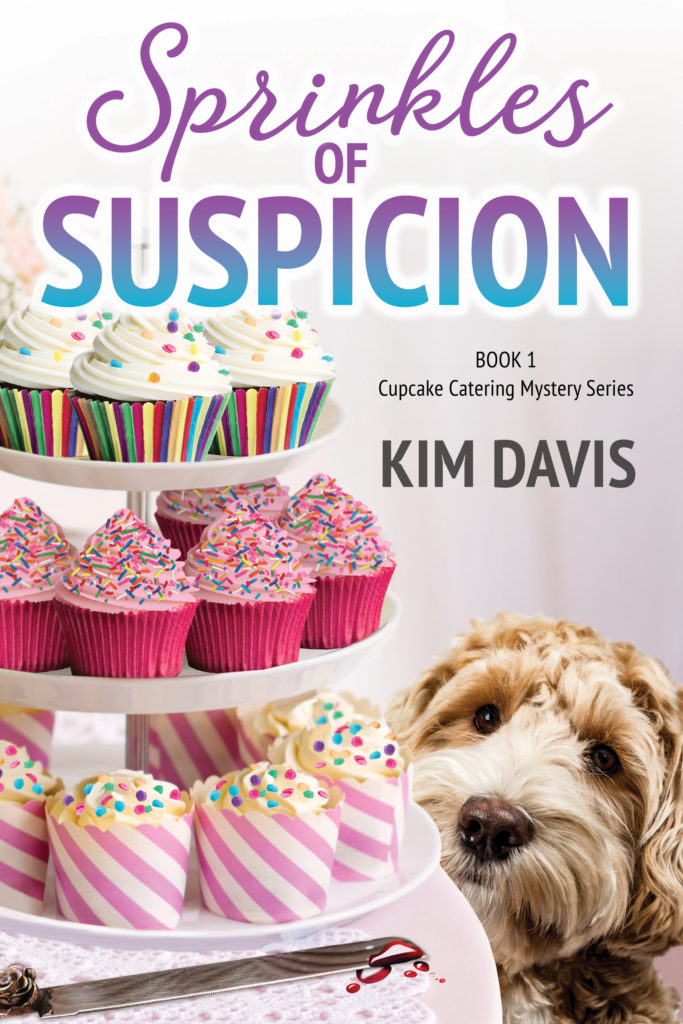 One glass of cheap California chardonnay cost Emory Gosser Martinez her husband, her job, and her best friend. Unfortunately, that was only the beginning of her troubles.

Distraught after discovering the betrayal by her husband and best friend, Tori, cupcake caterer Emory Martinez allows her temper to flare. Several people witness her very public altercation with her ex-friend. To make matters worse, Tori exacts her revenge by posting a fake photo of Emory in a compromising situation, which goes viral on social media. When Tori is found murdered, all signs point to Emory being the prime suspect.

With the police investigation focused on gathering evidence to convict her, Emory must prove her innocence while whipping up batches of cupcakes and buttercream. Delving into the past of her murdered ex-friend, she finds other people had reasons to want Tori dead, including Emory’s own husband. Can she find the killer, or will the clues sprinkled around the investigation point the police back to her?

Kim Davis lives in Southern California with her husband. When she’s not spending time with her granddaughters she can be found either writing stories or working on her blog, Cinnamon, Sugar, and a Little Bit of Murder or in the kitchen baking up yummy treats. She has published the suspense novel, A GAME OF DECEIT, and has had several children’s articles published in Cricket, Nature Friend, Skipping Stones, and the Seed of Truth magazines. Kim Davis is a member of Mystery Writers of America and Sisters in Crime.

June 4 – Escape With Dollycas Into A Good Book – REVIEW

June 5 – View from the Birdhouse – SPOTLIGHT

June 10 – Reading Is My SuperPower – REVIEW

13 thoughts on “Sneaky Interviews Piper the Dog from Sprinkles of Suspicion, A Cupcake Catering Mystery, by Kim Davis”